The Manchurian President (by Aaron Klein with Brenda J. Elliott) 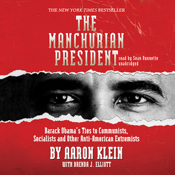 THE MANCHURIAN PRESIDENT by Aaron Klein with Brenda J. Elliott (unabridged) is presented by Blackstone Audio and comes with what is perhaps the best audiobook app available (see FEATURES, below).

Millions of Americans sense something is very wrong with the president of the United States, but they don’t know what. The Manchurian President answers that question. In writing this exhaustively researched book, Aaron Klein definitively exposes just how dangerous Barack Obama is as America’s commander in chief. Among the book’s chilling findings are shocking new details of his relationship with Bill Ayers and other Weathermen terrorists, his ties to Islam and black-liberation theology, socialist involvement in drafting the stimulus bill, the depth of his relationship with ACORN, and more.

NOTICE: This app includes the exact same 5-star recording offered elsewhere at much higher prices. It was professionally recorded by Blackstone Audio’s Earphones®-winning narrator, Sean Runnette. You are not buying yet another amateur or volunteer narration. No clicks, background noises, throat clearing, mispronunciations, tinny voices or monotones will be found here.

• EXPERIENCE. About 10.5 hours of narration. Created as a Folium enhancedAudio™ edition, this book includes extra functions and features not found on lesser players.

RATING: Suitable for adults interested in politics and current events.

___________________
“Aaron Klein has unmasked the most radical—and therefore dangerous—president by far this country has ever seen. The radical forces that shaped Obama, as revealed in this telling investigation, were not the best of the radical sixties, but the very worst—the anti-American, communist-supporting, terrorist fringe.” (David Horowitz, bestselling author)

“Aaron Klein apparently never received the J school memo to acquiesce to political power and to the utopian dream. The Manchurian President is a frightening yet vital primer for those now willing to look behind the curtain to see who is the leader of the free world.” (Andrew Breitbart, bestselling author and Internet news entrepreneur)