Love And FriendShip And Other Early Works 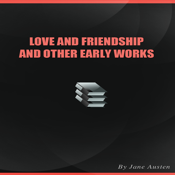 Written in a series of letters to the daughter of a friend, “Love and Friendship” tells of a young girl's path to betrayal, by way of a seemingly ecstatic marriage. The cult of sensibility – in which emotions are irresistible and overpowering and plots far-fetched and convoluted- was at its heights during Austen’s teenage years and scenes of fainting, raving heroines were inescapable.
To convey her satirical view of love and friendship, Jane Austen makes these themes oversimplified and stereotypical. They become paradoxical and make us laugh.
The device she uses to make sentimental clichés comical is exaggeration. For instance, the hasty decision to get married make Edward and Laura’s love at first sight rather improbable .This also shows that Jane Austen considered the romantic notion of sensibility as a myth—An improbable one.

So reading this short story can be fun but it can also give us an insight to understand and appreciate Austen’s method of pointing out the flaws of previous romantic views of love and friendship through satirical representations of anecdotes.

This book, in fact, is a collection of short stories, drama, humor, and other works written by Jane Austen. This work was written, at least, a decade before her major mainstream novels. As stated above—series of letters and other works that Austen wrote—they show a “free spirited” Austen; quite unlike her formula books that came later. As a read; this is not what one would call outstanding, but it is worthwhile to see a young Jane Austen writing without constraints, and writing as a young woman years before her name and fame.

Look out for other books on our site as we keep updating our collection of books for iPhone and iPad users and also you can download many other applications that we have developed on various topics such as travel guides, medical apps, festive apps, lifestyle apps, and many more at http://www.mobilecubix.com