Red Star Over Hollywood (by Ronald and Allis Radosh) 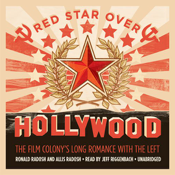 RED STAR OVER HOLLYWOOD by Ronald and Allis Radosh (unabridged) is presented by Blackstone Audio and comes with what is perhaps the best audiobook app available (see FEATURES, below).

Hollywood's Red Scare has been consistently represented as a nightmare of paranoia that victimized political innocents. But Ronald and Allis Radosh reveal the back story behind this myth, taking us inside the discussion groups that Communist Party members formed, the unions they tried to take over, and the studios they aimed to influence. They show that many of the screenwriters who later became part of the Hollywood Ten in fact succeeded in using film as propaganda for the Soviet cause. When their CP allies abandoned them to face the HUAC investigations alone, they were left questioning their own loyalties.

NOTICE: This app includes the exact same 5-star recording offered elsewhere at much higher prices. It was professionally recorded by Blackstone Audio’s Earphones® Award-winning narrator, Jeff Riggenbach. You are not buying yet another amateur or volunteer narration. No clicks, background noises, throat clearing, mispronunciations, tinny voices or monotones will be found here.

•EXPERIENCE. About 10.5 hours of narration. Created as a Folium enhancedAudio™ edition, this book includes extra functions and features not found on lesser players.

___________________
"Ronald and Allis Radosh give us a sobering, straightforward, scrupulously researched account of the Communist Party's actual goal." (Tom Wolfe)