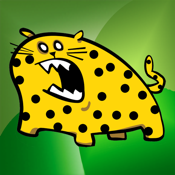 Adugo is a two-player strategy board game popular among the indigenous peoples of South America. It portrays a jaguar hunting dogs. The game comes from the Bororo tribe, a people of rich culture and mythology who live in the Pantanal region of western Brazil and are known for their colorful, sophisticated crafts. Adugo is also known as "Jogo da Onça" (Portuguese for "Game of the Jaguar").

The game is asymmetric. There are fifteen pieces: one jaguar and fourteen dogs. Both move one space at a time per turn, starting with the jaguar. The jaguar can capture by the short leap, as in Checkers, but the dogs cannot capture.

THREE PLAYING MODES:
- Play against the device as jaguar or dogs, in three levels of difficulty.

- Use Adugo as a traditional board game and play against a friend on the same device.

- Use the multi-player functionality to play against a friend over the Internet, or let Game Center auto-match you with other remote players.

INTUITIVE INTERACTION MODEL:
- When you tap a piece, Adugo gives you immediate feedback. If the piece can be moved, it glows and all legal targets are highlighted.

- To move a piece, you have two options: you can tap the piece and then tap the destination, or you can simply slide the piece across the board to the desired position.

OTHER FEATURES:
- Keep track of your points and compare your rank with that of other players and friends through Game Center's Leaderboard.

- When playing against the device, you can undo the last move, swap roles, or start over at any time during the match.

- Select from three options of piece shapes and board backgrounds.

- Select from two sets of fun sounds or use the silent mode.