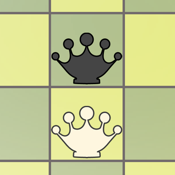 The value of playing ChessQueens is that it calls for an entirely new set of tactics and strategies even though the game pieces follow the rules of mainstream chess.

ChessQueens is a chess variant played with kings and queens only. The key difference between ChessQueens and traditional chess is that each player has at its disposal a single king and 15 queens. This means that there is no castling or en passant since the other chess pieces are not present.

The aim of the game is to win by checkmating the opponent. Aside from either ending in a victory or a loss, the game can end in a draw or a stalemate.