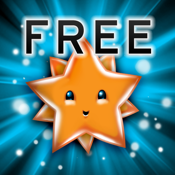 **BREAKING NEWS!!!**
123 POP HD for the iPad is here!
Twice the numbers, adding and subtraction,
new modes like hi-lo and frozen in time.
New and improved and only for the
iPad.

State of Play Gaming Blog
" My young daughter thought it was incredibly addictive, and even I enjoyed it. It's not just a simple math drill: the bubbles bounce around with a bit of physical modeling, and as they begin to crowd the screen things can get pretty tricky. "

Lunch Box Reviews
" 123 Pop is a solid educational app for children learning to count or do basic math problems. The app encourages children to use their minds instead of a calculator to problem solve. Recommended! "

123 POP, is a challenging puzzle game for all ages. Simple to play, hard to put down.

Touch numbers 1-10 as they fly around a surreal environment that is populated by vortexes, rockets, magical stars and the occasional leaping whale.

To score points, touch 1 number. Then touch a second number.
The third number you touch must be the sum of the first and second number. Points are earned for every correct sequence.
The player has 60 seconds to reach the target amount. If the
player has scored above the target number when the timer runs out, the player has earned another round of 60 seconds.

Sound easy?
But watch out for beasts that leap out of the ocean or vortexes that gobble up the numbers. Moreover, The numbers are all in motion, reacting to physics so you'll have to be quick to make a sequence. Your hope to reach the highscore is to enlist the help of rockets and magic stars.

The rockets are launched with a simple touch. When launched, your score is increased by any numbers your rocket collides with.

The magical stars when touched, will pop any numbers in range and add those numbers to your score.

- Free version does not include high score and is limited
to two rounds of play.

- Brain teaser that exercises the mind.

- Difficulty level can be set to EASY, NORMAL, HARD.

- Physics based animation and stylized graphics,

Peter Lacalamita is a member of Moms with Apps, a collaborative group of family-friendly developers seeking to promote quality apps for kids and families.
Recommended Ages: All
Categories: Games, Math, Addition, Action