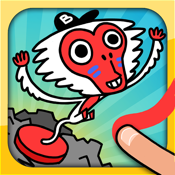 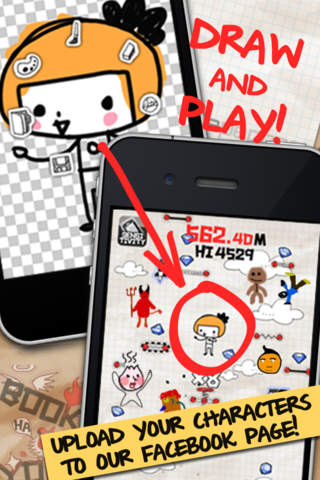 In Doodle Bouncing Star, you can create your own character to jump up the platforms! Use the editor tool to draw and create your own bouncing stars - You can even import photos from your camera album and edit them using the editor. Help the disposed robots escape from the scrapyard by making them jump as high as possible. Collect Blue points to unlock more characters and costumes!

If you experience an app crash we're very sorry about this, we will fix this problem asap. Please send us an email to tell us the iOS version of your device. It will help with our next update.
Email: support@bluepepper.co.kr

iTunes reviews (US)
****
"it looks sleek, easier than doodle jump, many character to play, various costumes to put on I love it"

"This is my favorite app!! It is so unique and awesome!!!"

"Awesome gameplay - This game has a lot going for it when you consider that it builds on the success of games like Doodle Jump with unique additions and a solid commitment to further updates. I'm looking forward to future content but am totally enjoying creating my own characters for now using the ingame editor. Update:Update has added the challenge that I was looking forward to! I've already showed this game to people who love putting on their favorite avatars as their jumping star. Funny how the people who say doodle jump is better likely have no personal effects to customize their character with."

-----------
iTunes reviews (FRANCE)
****
“Super game. Very similar to froggy and mega jump but better because you can design and draw your personal character and you can add costumes like angel /wings /demon /antennas… The characters have different strengths so the game play is unique; it’s ONE OF THE BEST APPS FROM ALL THE JUMPING GAMES!”

“I think it’s a very good game, this game can be competed with doodle jump. I love the music, the fact that I can customize my own character. I love doodling.”

“Love this game and all the features on it”