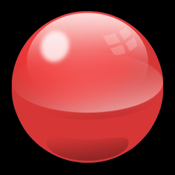 Detailed Description:
Do you think you have a good concentration and control on your hands’ reflexes? Let’s test it out then.

The objective seems simple enough: Keep your ball rolling by tilting your device in a particular direction, without letting it touch the wooden frame. For every second you stay in the game, you will gain points. You clear the first level on earning hundred points.

You might have played ball games before, but you haven’t played a ball game like this one. A game full of entertainment and fun that kids will love as it turns the action into a 360-degree affair, challenging you to spin your device around in different directions at the right moment to roll the ball to prevent it from touching the wooden frame, which requires skill and good control on your hands’ reflexes. Sure, you can gain points the longer you stay in the game, and some bonus points on green balls that appear after every specific time interval, but you’ll need to be really careful as the speed of the ball increases with the increase number of levels and as the time passes, which in turn also increases the difficulty. Take your time getting away, however. There are surprises lurking at every level. Get through, if you dare!

When you complete a level, you’ll earn two extra points for every second you play, at the next level. The Rolling Ball game tracks your highest scores, time duration of the game, date, and the scores you achieved in your last game which you can view later on. If you need to quit during a game, you will lose your score. If you get a call then, rolling ball pauses the game for you & saves your progress, to which you can return to later on.

Need some help? Read on for our tips and tricks.

Tilt your device in the direction you want the ball to roll in the playing field, so plan accordingly.
Start slowly and work your way up to higher levels. Aim your first few rolls such that the ball remains in middle, to keep it away from the wooden frame.
Aim your ball with care, knowing that the bonus green balls will appear after every few seconds; get those to get extra bonus points.
If your shot likely won’t hit the green ball, try to position it so that the ball does not touch the wooden frame. This is a good strategy for maintaining your score to work your way up to the next level.
Success means not only a big point bonus but for every second you stay in the game, you will gain points. On completing a level, you’ll earn two extra points for every second you stay in the game with each new level.
As you progress through the levels, the speed at which the ball is rolling will increase with each new level. But first you must clear the first level by earning hundred points.
Watch out for the wooden frame, if you ball touches it, you will loose the game. This becomes difficult, when the speed of the ball increases at each new level.