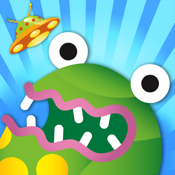 “BugMath teaches solid concepts in a number of early math areas, and the arcade-like gameplay is exciting for kids.” – Common Sense Media

“Overall this is a fantastic educational game for children. The positive reinforcement, mixed with a very creative learning style, will definitely aid children to learn their numbers.” – Rebel Gaming

“BugMath teaches number recognition, sequencing, and logical thinking through visual and auditory clues – all in a fun and engaging way.” – Fun Educational Apps

Zixxe (Kid's label TotsJoy) introduces BugMath, a math game (created in Singapore) for your kids that will enable them to learn counting, addition, subtraction, and matching—all with a friendly alien buddy named Ug-ug!

While traveling in his shiny new spaceship, Ug-ug gets lost in a vortex and accidentally crash-lands on a mysterious planet called Aliennz. As he leaves his ship and explores his surroundings, he discovers that Aliennz is full of bugs! Your child can help Ug-ug escape his buggy foes by using their math skills.

Parents will appreciate how Ug-ug helps to teach math skills to their children, ages 3 to 6, while kids delight in coming along with Ug-Ug on his math adventures.

BugMath features an easy-to-use, intuitive interface with accurate controls for even the littlest fingers, make learning math fun and easy!

Join Ug-ug as he explores the bug-filled planet Aliennz and learns math skills through 5 entertaining and educational activities:
-Bug Attack: The bugs want to defeat Ug-ug and steal his spaceship! Help Ug-ug zap the falling bugs before they land on the ground and count along each time Ug-ug zaps a bug. 1, 2, 3, 4, 5… there are 100 bugs to beat!

-Counting Game: Ug-ug helps to teach double-digit numbers 11-20. Count the number of bugs on the screen and paint the numbers and the words!

-Big & Small: Help sharpen Ug-ug’s skills by putting the little and big bugs in the correct order—from smallest to biggest or biggest to smallest. Find the right answer and watch an even larger bug munch on the others!

-Plus Minus Bugs: Ug-ug wants to practice his addition and subtraction skills. You can tap on the bugs to count up or down to find the correct answer!

-Matching: Oh no, several pairs of bugs are trying to stow away on Ug-ug’s spaceship! Tap on the spaceships to aid Ug-ug in finding and matching the hiding bugs.

BugMath is filled with fun games for your child and Ug-ug to play and teaches many skills, including:
-Number recognition and logical thinking using visual and auditory clues
-Quantity recognition and sequencing using bug icons
-Counting of numbers greater than 10 with the use of voiceovers
-Solving simple addition and subtraction equations
-Sorting skills from small-to-big and big-to-small using different sized bugs as visual clues
-Reading and learning to write spelled-out numbers
-Memory strengthening through the use of matching
-Helping to foster fine motor skills with the Bug Attack game


*Understanding the association of whole numbers, even numbers and odd numbers

*Developing understanding of connection with whole numbers and operation of relationship between graphical, countable groups, and addition and subtraction

*Sequential ordering of increasing and decreasing numbers and representing their magnitudes on a single number and size-graphical line.

TotsMobile develops fun and educational mobile games for kids. If you and your kids are having fun with Ug-ug and want the scoop on the latest games and updates from TotsMobile, follow @totsmobile on Twitter and like us on Facebook at http://www.facebook.com/pages/Tots-Mobile/169540943058722. Now get to zapping those bugs!