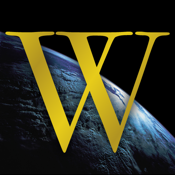 Whitaker’s Almanack Quiz is the most challenging quiz on the app store. With over 1000 general knowledge questions across a range of topics this game will challenge every facet of your knowledge and rank you against other users the world over in a global leader board.

Who was the subject for the first of Marie Tussaud's waxworks? What is the literal meaning of coup d’etat? Which is the oldest: Harrods, Selfridges or Liberty? How much land did the Allies gain at the Battle of the Somme? Which planet orbits the Sun once every 88 days?

Over 1,000 general knowledge questions, compiled by the editors of Whitaker’s Almanack.
Categories as wide-ranging as Art & Design, Business, Entertainment, Geography, History, Language & Literature, Music, The Natural World, Philosophy & Religion, Politics, Science and Sport.
Climb the leader board on Game Centre, competing against your friends and other players from around the world.
Boast about your scores on Facebook or Tweet them to your friends.
Dying to know where you went wrong? Reveal the answers with the in-app add-on.
Play against the clock at three different skill levels: novice, skilled or genius.
Featuring four different question types: multiple choice, guess the year, matching pairs and true or false.


Think you’re up for the challenge?