Rat On A Skateboard 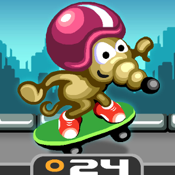 Ratty is back in his MOST ANTICIPATED adventure ever to hit iOS!

Grab that board and get ready for a kick-flippin' adventure down the Banana Harbor.
The game includes both randomly generated tracks for endless game play, and 70 carefully handcrafted tracks to master.

Ready to stack up some serious scores?
Then you better start grinding those handrails, stomp those garbage cans and grab some cool stunt power-ups!

- Touch Arcade: "This latest offering features all the hallmarks of a Donut Games release – colorful pixel art, simple game mechanics, and high replay value. I love just about all of Donut's 20+ iOS games, and Rat On A Skateboard is no exception."

- GameZebo: "All of this is wrapped up in the same high-quality cute graphics and sound that Donut Games is known for... You have no excuse to pass it up."