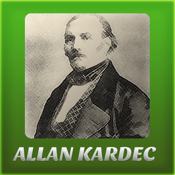 "O Livro dos Espíritos" is a book from Alan Kardec.

This app is an eBook of "O Livro dos Espíritos" (in Portuguese).