Cop Killer (by Maj Sjöwall and Per Wahlöö) 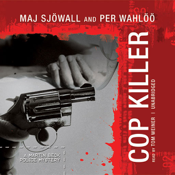 COP KILLER by Maj Sjöwall and Per Wahlöö (unabridged) is presented by Blackstone Audio and comes with what is perhaps the best audiobook app available (see FEATURES, below).

In the penultimate installment of this masterful crime-fiction series, Martin Beck, now head of the National Murder Squad, is called to a sleepy part of the countryside to investigate a woman’s disappearance. What Beck doesn’t know is that the woman has already been murdered, her body dumped in a swamp. At the same time, a midnight shoot-out between three cops and two teenage boys ends with one policeman dead.
As Beck and his partner, Lennart Kollberg, investigate both cases, they encounter two figures from their earlier cases. Folke Bengtsson, the convicted killer from the first novel of the series (Roseanna), has been recently released. Since that murder shared many characteristics with Beck’s present case, Beck comes under pressure to arrest Bengtsson. But Beck has begun to doubt that Bengtsson was guilty of any murder at all.

NOTICE: This app includes the exact same 5-star recording offered elsewhere at much higher prices. It was professionally recorded by Blackstone Audio’s Earphones®-winning narrator, Tom Weiner. You are not buying yet another amateur or volunteer narration. No clicks, background noises, throat clearing, mispronunciations, tinny voices or monotones will be found here.

•EXPERIENCE. About 8 hours of narration. Created as a Folium enhancedAudio™ edition, this book includes extra functions and features not found on lesser players.