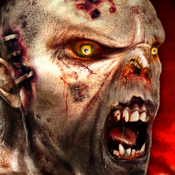 ***CELEBRATING THE RELEASE OF "WORLD OF KHAOS"
***World of Khaos for Mac on the BEST NEW GAMES list spot #1 in more than 150 countries!***

HellGore in the TOP 10 scariest iOS games of all time!
- SlideToPlay

Get ready for AppStore's most intense survival experience. Are you strong enough to survive in Hell? There's only one way to find out... enter the world of HellGore!

** Was featured by Apple in New and Noteworthy **

“The game is plenty fun”
- SlideToPlay

“It's still an easy action title to enjoy and surprisingly fun thanks to the variety you're given from the get-go.”
- AppSpy

“If you like horror themes and enjoy shooting games, HellGore is definitely something worthwhile”
- iAppWorld

HellGore is a horror themed shooter taking place in hell, which is depicted as a dark gothic medieval world. The story begins after Evil takes the main protagonist's soul and endows him with dark powers.

HellGore will have you fighting against a horde of zombies and other creatures - don't worry about your weapon of choice as you will be supplied with a mixture of real-world modern weapons like shotguns, grenade/rocket launchers and medieval/fantasy weapons such as bows and crossbows. Along the way you will gain dark magic weapons such as spells, amulets, dark powers and rites.

You control the main protagonist, but there are vehicles which you can control too. In addition, a special power allows you to possess any of the monsters available in the game, and to use all of its attack skills until it dies! Some dark powers will allow you to summon creatures who will help you in battle. Also, you can take on the form of a Werewolf, and use its special attack skills to quickly vanquish your enemies. And that isn't all...

If yes, then check out our latest game: Zombie Area!

Be sure to check out the incredible Cinematic trailer and Gameplay video at www.rapidturtlegames.com