SpeedBooks - 39 Classic AudioBooks Read in Half the Time! 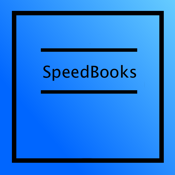 This is a collection of 39 classic literature SpeedBooks®. A SpeedBook® is an audiobook which is spoken in about 1/2 the time of a normal audiobook's pace. Humans are capable of comprehending up to 800 words per minute, so the audio is sped up in order to get through the entire book in less time! This is great if you need to read the book, but don't have the time to read it, or can’t even spend long hours listening to it! There is also an option to listen to the books at normal pace as well if you want to!

Here are the included classics:

Buy now and you can be listening to it in minutes on your iPod Touch, iPhone, or iPad! This collection has some of the great classic work of literature all combined into one app! Listen to as many of the audio books as you'd like! Download this app and you'll be listening in no time at all.