Blow Up the Frog 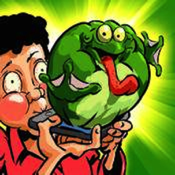 "Puzzles, shooters and adventure games, they start feeling like they’re all the same eh? Why not try something a little bit different? [...] you can try Blow Up the Frog"
-The APPera

Blowing up frogs, the mythical activity that everybody’s heard of but so few have actually tried. Who among us didn’t once have a friend who DID IT? Who did not, at one point or another, imagine what it would be like? Well, now anybody can do it. „Blow Up the Frog” lets you fulfill your childhood fantasy, taste the forbidden fruit, experience the taboo - and in a way that is not less spectacular than in real life, yet much more hygienic and safe (for the blower and the frog alike).

„Blow Up the Frog” gives hope for an actual reduction in the number of real-life frogs being ruthlessly inflated.

1. Tap on the frog and hold to keep it still.
2. Blow into the microphone to pump up the frog.
3. Release the frog once it achieves the desirable size.

How to get the best score?

A jury evaluates the frog's underwater performance and your pumping style. The more bubbles are produced the more points you get.

Also, the number of blows is important - the fewer blows it takes the more points you get.

To get 3x10 points, you will need to pump up the frog to the maximum extent with just one blow. Good luck!

Extended blowing may help you relax - do this instead of smoking a cigarette.