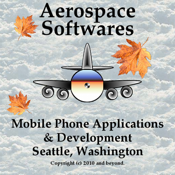 
The 'View Ratings' item on the start menu can be used to learn what rating other users of the application have given to an airport, flight or a seat.
Other main menu choices let you see the airlines website, their executives, and the current price if the airline is not private (if you're an investor, say).
Other menu choices show the rights you have as a passenger (the laws of the country that is home to the airline), another shows you the Canadian governments code-of-conduct for airlines.

Questions or feedback? See our website, send an email. For general docs / help with the application, touch the 'Docs' button in the bar below the main menu.