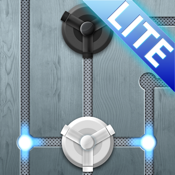 MÜHLE10 Lite features matches against computer players (limited to one skill), human players and even against online players (you are inviteable to matches by your friends and every owner of the full version of MÜHLE10 Online)

MÜHLE10 is a classic strategy board game that has been played for more than two thousand years - the classic Nine Men's Morris game.

MÜHLE10 allows true ONLINE-GAMING via Internet against players from the whole world! Furthermore it's possible to play against the strongest computer player of all nine men's morris versions in the whole AppStore.

IPHONE MATCH
First of all the player color must be selected - white or black. After the color has been chosen the computer player's strength has to be selected.

This skills are available listed by the computer player strength:

Skill I:
This skills is very suitable for beginners.

Skills II-IIIIII:
These skills show the true strength of the computer player and are suitable for true merrils masters.
Only available in the full-version.

ONLINE MATCH
After entering the game lobby available players will be searched automatically.
As soon as a suitable player has been found a new match gets started.

Both players are allowed to take their moves within 10 minutes. If one of the players runs out of time - he has lost the game.

At the end of online-matches the game results and the impact to the high score is shown. All results are collected in the global high score-table and allow a comparison with other players. The results are calculated in the m-ELO method which is a variation of the well known ELO rating system used in chess.

HUMAN
This mode allows to use the iPhone similar to a classic merrils board. Two players may play by turns on one device.

The remaining tokens left to place are shown at the top of the board (black tokens) and at the bottom of the board (white tokens).

Moving phase:
Once each of the players has placed all nine tokens on the board, they take turns in moving one of their tokens to an open adjacent position along a line, tap a token to select it and the valid positions you may move to are highlighted with a blue glowing dot. Then tap one of the highlighted positions to move the selected token to it.

Forming a mill:
During the placing phase of the moving phase, whenever a player forms a row of three connected pieces along one of the lines on the board (a mill), they may permanently remove one of the opponent’s token from the board.

Flying Phase:
When a player is reduced to three tokens they are allowed to move their tokens to any open position on the board, not just to adjacent positions. This is called ‘flying’.

Ending the game:
To win the game you must prevent your opponent from playing by blocking off all their moves, or you must reduce them to two tokens.
The game ends in a draw if the same board position is repeated three times or fifty moves are played without either player forming a mill.

STRATEGY
At the beginning of the game, it is more important to place pieces in versatile locations rather than to try to form mills immediately and make the mistake of concentrating one's pieces in one area of the board.
An ideal position, which typically results in a win, is to be able to shuttle one piece back and forth between two mills, removing a piece every turn.