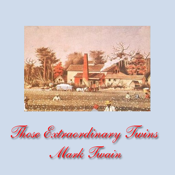 The characters of Luigi and Angelo Capello were originally envisioned by Twain as conjoined twins, modeled after the actual late-19th century Italian conjoined twins Giovanni and Giacomo Tocci. They were to be the central characters and the novel was to be titled Those Extraordinary Twins.

During the writing process, however, Twain realized that secondary characters such as Pudd'nhead Wilson, Roxy, and Tom Driscoll were taking a more central role in the story than he had envisioned. More importantly, he found that the serious tone of the story of Roxy and Tom clashed unpleasantly with the light tone of the twins' story. As he explains in the introduction to "Those Extraordinary Twins",

The defect turned out to be the one already spoken of--two stories on one, a farce and a tragedy. So I pulled out the farce and left the tragedy. This left the original team in, but only as mere names, not as characters.

The characters of Luigi and Angelo remain in Pudd'nhead Wilson, as twins with separate bodies. Twain was not thorough in his separation of the twins, and there are hints in the final version of their conjoined origin, such as the fact that they were their parents' "only child", they sleep together, they play piano together, and they had an early career as sideshow performers.

"Those Extraordinary Twins" was published as a short story, with glosses inserted into the text where the narrative was either unfinished or would have duplicated parts of Pudd'nhead Wilson.