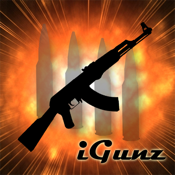 The original and best gun app! The only one with super-realistic recordings of each gun.

Select your weapon of choice, then touch and hold the screen to shoot. With authentic sound effects, muzzle flash and reloading.

If you do then you don't need to purchase the Gun Pack. "iGunz - Machine Gun Mania" is another paid-for app that contains the same content as the In-App purchase in this app.