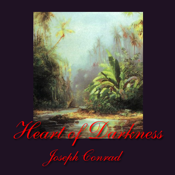 Heart of Darkness is a novella written by Joseph Conrad. Before its 1902 publication, it appeared as a three-part series in Blackwood's Magazine. It is widely regarded as a significant work of English literature and part of the Western canon.

The story tells of Charles Marlow, an Englishman who took a foreign assignment from a Belgian trading company as a ferry-boat captain in Africa. Although Conrad does not give the name of the river, at the time, Congo Free State, the location of the large and important Congo River was a private colony of Belgium's King Leopold II. Marlow is employed to transport ivory downriver. However, his more pressing assignment is to return Kurtz, another ivory trader, to civilization, in a cover-up. Kurtz has a reputation throughout the region.