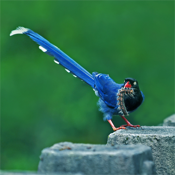 Taiwan is a semi-tropical island located on the curved line of islands in the Pacific Ocean on the outskirts of the Chinese mainland. The island is blessed with abundant natural resources, including several high mountains over 3,000 meters above sea level, primary forests, lakes, rivers, wetlands, farms, reefs, etc. Its complex geographical environment makes it well-suited for many migrating birds of East Asia. Such a special island ecology makes Taiwan unique.

Because Taiwan is an island separated from the mainland, endemic species evolved over the long term, and the island has formed a distinctive ecology of wildlife. This online book contains photos of 23 types of Taiwanese endemic species and 55 endemic subspecies. According to the latest report released in 2008, there are a total of 570 types of birds that can be found in Taiwan. Among them, there are 170 types of resident birds, of which 45 percent are endemic species or subspecies. Most of them are forest birds belong to Phasianidae, Pycnonotidae, Timaliidae, Columbidae and Paridae families as showed below: