A Millionaire Of Yesterday. 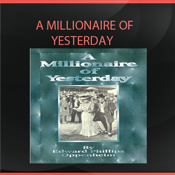 The two Englishmen walked slowly back to the hut. Between them there had sprung up from the first moment a strong and mutual antipathy. The blunt savagery of Trent, his apparently heartless treatment of his weaker partner, and his avowed unscrupulousness, offended the newcomer much in the same manner as in many ways he himself was obnoxious to Trent. His immaculate fatigue-uniform, his calm superciliousness, his obvious air of belonging to a superior class, were galling to Trent beyond measure. He himself felt the difference - he realised his ignorance, his unkempt and uncared-for appearance. Perhaps, as the two men walked side by side, some faint foreshadowing of the future showed to Trent another and a larger world where they two would once more walk side by side, the outward differences between them lessened, the smouldering irritation of the present leaping up into the red-hot flame of hatred. Perhaps it was just as well for John Francis that the man who walked so sullenly by his side had not the eyes of a seer, for it was a wild country and Trent himself had drunk deep of its lawlessness. A little accident with a knife, a carelessly handled revolver, and the man who was destined to stand more than once in his way would pass out of his life for ever. But in those days Trent knew nothing of what was to come - which was just as well for John Francis.