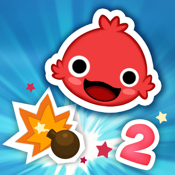 ★ TouchArcade.com: "It stands tall as one of the best –if not the best– puzzle games in the App Store"
★ Gamezebo.com - 4.5/5: "iBlast Moki 2 is like Angry Birds with bombs, which is about as awesome as it sounds."
★ TouchGen.net - 5/5: "This is a true sequel, where you take everything that was great about the first game and then improve on it in almost every way."
★ 148apps.com - 4.5/5: "Few games make me feel like the genius that I am like this one when I succeed"

SHARE YOUR CREATIONS
- Build new levels with the advanced physics editor which was used to create the entire game
- Only your imagination is the limit to what you can build, collect the many tools such as joints, motors, decoration, stickers and create some beautiful level with crazy contraptions
- Share your levels online and enjoy the puzzles created by thousands of players

Staff Reviews
iBlast Moki 2: Save the Mokis, Feel Like a Genius

Cute graphics, addicting gameplay, and over 90 levels best describes iBlast Moki 2 by Godzilab. It is the sequel to iBlast Moki, and many improvements make this a worthwhile...