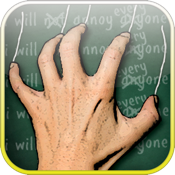 Introducing the most Annoying Application you could have ever imagined for the iPhone, iPod Touch, and iPad that's puts the power of being able to Annoy anyone and everyone in the Palm of your hand.

Ever want to get someones attention Fast?

Have you just wanted to amuse yourself when you are board?

How would you like torture others in the most annoying way possible?

Wouldn't it be great to get a little revenge?

How would you like to drive others crazy just for the fun of it?

What is Annoy Toy?

This is by far the most annoying application you will come across and you hold the keys to driving folks crazy with this app.

This hilarious yet powerful app is loaded with 4 of the most annoying sounds known to man or woman.

We have researched and tested different sounds and found the best of the best for Annoying Anyone Fast.

You choose one of the four buttons on the screen:

(1): Nails Against the Chalkboard - This one speaks for itself.

(2): The Mosquito - A somewhat silent yet powerfully ear shattering sound that sends them running for cover.

(3): Teeth Grinder - They will not be able to ignore this finger squeezing sound.

(4): Balloon Bomb - This sound will literally make there hair stand up.

Once you have chosen one of the 4 Annoy Buttons your mobile device and armed and ready to fire.

Simply Swipe your finger across the screen to begging the torture on your unexpected target...

That alone would leave anyone running for cover, but we wanted to add even more to this already Annoying App and so we did.

We have loaded this app with dozens and dozens of tips, tricks, techniques that will make you the most Annoying Person on the planet.

By simply clicking on the Shock Man Button you will open the vault and reveal one of dozens of Annoying things that you can do to amuse your evil self.

These are not just some cheesy tips and tricks, NO these are time tested and proven to annoy people with Super Ease.

Whether you are in the mood to just have a little fun, clear a seat for yourself in the park, get a little revenge on people that are getting on your nerves, or if you are just board and want to spice up your day this App is it...

So what are you waiting for?

Get the Most Annoying App Now before someone else gets it and annoys you with it...

Get the App now at the INSANELY LOW, LIMITED TIME, INTRODUCTORY PRICE of JUST $1.99 (50% off original price) and be locked in for the AMAZING UPDATES, ADD-ONS and IMPROVEMENTS which are COMING VERY SOON.

The Updates that are coming are awesome and with the Updates, Add-ons and Improvements the price will go up, but if you get in now at the into price, you get all updates and add-ons FREE!!!

You could be minutes away from turning your boring phone or tablet into The Most Annoying Device on the Planet and FOR LESS THAN A VALUE MEAL AT McDonalds.

Act now before introductory offer is over and price goes up and heck, take it to McDonalds to Annoy Everyone in the place!

App has been tested on the latest version of iPhone & iPad OS with no problems to report.