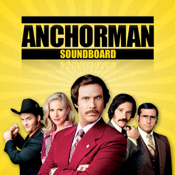 The most hilarious news anchor based comedy film of the decade, Anchorman, is now pocket sized and at your disposal in soundbite form.

More than 200 sounds make this the biggest and best Anchorman soundboard available with the slickest interface ever. Now you can browse all your favourite quotes by Character.

By popular request we have included every quote imaginable and we promise we will add in any quotes we have missed.

"I DON'T KNOW WHAT WE'RE YELLING ABOUT" - Brick

"We'll be doing the no pants dance…" - Brian

"Mr Burgundy You Have A Massive…" - Veronica

… we have also added in some of the lesser known quotes and some we just blatantly missed in the last version.

All quotes are arranged by character and because there are simply so many sounds, we've picked a few of the best ones and "starred" them.

We don't like to toot our own horn, but it feels damn nice and this really is the BEST Anchorman app available (we made another one, but it was TOO good so we had to destroy it)

When you've downloaded it and realise how much you love this amazing app, leave a 5 star review and we'll keep the app update with great new features.

// IMPORTANT
Before leaving negative reviews ensure the "mute" button is not switched on. Sounds will not play if you have the phone/ipod muted (as you'd expect). Thanks.

// DISCLAIMER
The content of this app is copyright of its rightful owner, all licenses remain that of the rights holder. All revenue from this app pays for development time and costs.