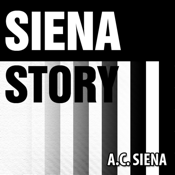 Siena, after a year of purgatory in the Serie B, came back in Serie A. To honor a fabulous season, dominated from start to finish by the men of Antonio Conte, arrives Siena Story.

In the first six chapters of Siena Story, tells the story of the ultra centennial story of ‘ROBUR’. Since dawn to Era Nannini. Without forgetting the historical promotion in Serie A and analyzing the seven championship in Serie A.
In Siena Story also the most beautiful films of the victories, the boards of the strongest players and the portraits of the men who made history from the bench of desk.

Era Nannini: With the president Danilo Nannini, Siena settled down in Serie C and touched a historical promotion in Serie B.

Team Yo-Yo: In England they are called team ‘yo-yo’ teams running up and down.

Is Serie A: The first historic promotion, obtain in season 2002/2003, was unexpected and fabulous.

De Luca: De Luca bianconeri in Serie A. But most managed to keep ‘his’ Siena up in the championship. The victories on Fiorentina (derby) and Milan are unforgettable.

Videos: In Siena Story are present best videos of most important victories for bianconeri.

Bulletin Board: All placements that received the ROBUR since 1920.

Stars: In this section there are players who have dreamed Siena.

Condottieri: The portraits of Presidents and coaches who made history of Siena.

Fans: The history of black and white’s supporters. Rivarly and twinnings.