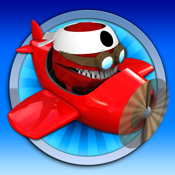 The madcap critters from the animated film "Arcade Trap" have figured out how to fly, and now it is up to you to stop their aerial antics.

Use your device (iPhone4S, iPhone4, iPod Touch 4th gen, iPad2) to fight back the critter hoard. Whether you're inside or outside use the camera to locate and eradicate the aerial Critter menace. Build drones to harvest the valuable anti-grav crystals or defend against the pesky critters.

Game features include:
- Lots of weapons types and upgrades, ranging from lasers to the awesome dual mini-guns,
- Diverse range of enemies, each with unique gameplay traits and personality, ranging from the sneaky mine-laying JetPack critter to the slow but tough Concrete critter blimp,
- Build drones to help fight the critter hoard, "trace" a blueprint to construct these mechanical sidekicks,
- Multiple game modes (Challenge mode to unlock power-ups and achievements, Survival mode allows you to access all unlocked tech and fight back the critter menace, and Arcade mode designed specifically for non-AR control so it can be played on the bus/train/plane/car/bed(...?)... how long can you last?),
- Augmented reality (AR) gameplay, literally turn around to see the critter behind you,
- Alternate touch control featuring intuitive and easy to use aiming multi-touch controls,
- Game Center Achievements and Leaderboards
- A simple but rewarding combination of FPS, RTS and tower defence gameplay.

The game will also work on older devices (iPhone 3GS and iPod Touch 3rd gen, iPad) using touch control rather than the augmented reality control. The game is not designed to work on 1st and 2nd gen devices (original iPhone, iPhone 3G, iPod Touch 1st & 2nd gen) - so don't even try it!