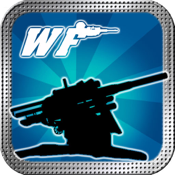 In German crazy for his aggressive plan at the same time, the European nations alliance formed Allies, prepare together German army invasion, resist trench, they built up machine guns and artillery, preparation and invaders lose a dead one heartbeat.

DESCRIPION:
This game will bring you to the real smoke battlefield,let you feel the tension and irritation of the war.


In game , you played as a Allied artillery soldier to use artillery against
the waves of enemy.

With the deepening of the game,the enemy will be more and more powerful, you need to upgrade your weapon system with higher attack power before you start to play,with the upgraded weapon,you will calmly facing the enemy's attack. Still hesitant?

Take your weapons,take your supply,for peace, fighting with the damn invader!