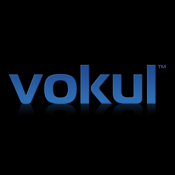 Get vokul - a powerful voice control app for your iPhone, iPod touch, and iPad!

With vokul, you can perform many useful tasks without pressing any buttons! Use vokul to:

+ Dictate text messages
+ Dictate emails
+ Post to Twitter and Facebook
+ DJ music, podcasts, audiobooks, and iTunes U lectures
+ Control the audio player with your voice
+ Call contacts in your address book
+ Listen to your Twitter and Facebook feeds
+ Get the current date and time

vokul is fast, accurate, and tuned for noisy environments, like your car!

Use simple voice commands to interact with vokul, even while audio is playing. You can skip backward and forward within a track, navigate between tracks, pause/resume playback, and speed up or slow down podcasts!

Launch vokul and connect your device to your car* stereo system for the ultimate handsfree audio experience!

New in version 1.2, it's easier than ever to stay in touch safely while on the go. vokul now supports Bluetooth headsets and in-vehicle systems* - it's the safest way to send a message while driving!

Unlike other voice control apps, vokul can be controlled entirely with your voice. vokul responds to your commands only when called upon – just say "hey vokul" to get vokul’s attention. You can even say commands while audio is playing, thanks to vokul's acoustic echo cancellation (AEC) technology.

With vokul, button presses and distracted screen glances are a thing of the past!

Examples (while audio is playing):

Check out www.vokulnation.com for more information and videos showing vokul in action.

* Bluetooth operation is great for messaging; A2DP mode for music playback is NOT supported, due to iOS limitations.

Note: vokul currently does not support reading received text messages, due to limitations imposed by iOS.

Note: Starting with iOS 6, you must press 'send' to send a text message or email. This is due to iOS restrictions.