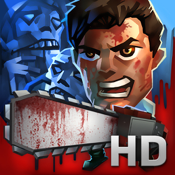 It's Evil Dead: The Game! Play the ultimate experience in grueling horror!

Evil Dead is a horror-action-shooter-adventure where you play as Ash and must fight off Deadites and a host of other possessed abominations in order to stay alive and protect your friends. Groovy!

- 30 action-packed levels in a Story mode based on the cult classic film!

- Axes, boomsticks and chainsaws galore! Fight bosses and lead your friends to safety!

- Mighty fine 3D graphics that will swallow your soul! You will say, "Yeah... truly amazing."

- Play through the original film's plot and then some! Separated into two chapters, Autumn Horror lets you experience the film, and Winter Nightmare lets you feast on a brand new storyline!

- There's so much gore, you'll literally have to wipe it off your screen!

- Earn badges and prove your worth! There’s a Game Center leaderboard!

- Includes dialogue and the score from the original film!

- Celebrate the 30th year anniversary of the horror movie that started it all!

"Stays true to the feel of [the film], which is essential." – Rob Tapert, Executive Producer of The Evil Dead

"They’ve done a great job of faithfully recreating the original movie, plus adding some new content of their own." – Appolicious


For customer support, reach us at support[at]triggerglobal[dot]com.