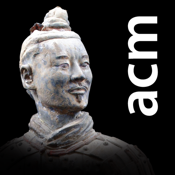 This is the official iPhone app of the major exhibition “Terracotta Warriors: The First Emperor and His Legacy” at the Asian Civilisations Museum in Singapore, 24 Jun 2011 - 16 Oct 2011.

The main feature of the app is an interactive story-driven exhibition tour featuring Augmented Reality (AR) experiences and mini-games. You can witness terracotta warriors come to life at the exhibition (for example, shooting and reloading crossbows) via AR technology, which superimposes animated 3D objects into the real exhibition gallery space.

WARRIOR TRAIL @ ACM
Experience an interactive story-driven exhibition tour featuring AR experiences and mini-games that enhance enjoyment and understanding of key artefacts featured in the exhibition. The story features the rise and fall of the Qin Empire as told by Li Si (the Prime Minister of the First Emperor of China) to his son.

__
About this app: ACM: Terracotta Warriors app was produced by the Asian Civilisations Museum, and designed & developed by Magma Studios