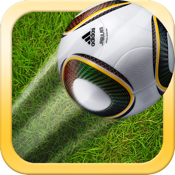 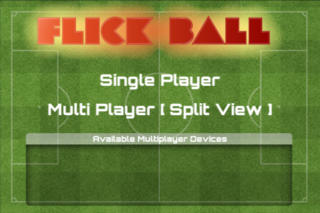 Flick Ball Pro combines nice graphics, multiplayer fun, realistic physics engine and different game options to personalize your football / soccer game.
Challenging game play modes allows you to play with one or even two devices at once. Pushing your skills to the absolute breaking point - and wireless game play mode lets you challenge anyone with the app on another similar device!

Soccer is the world most popular sport game. It is also commonly known as football.

✭ Universal App which runs on iPads, iPhones and iPod Touch with iOS 4.0 or higher.
✭ Realistic Ball movements, because Flick Ball Pro uses a real physics engine to calculate the ball movements.
✭ Over 220 predefined countries from around the world are available to select your team from. So you can select the football team you want.
✭ Single player mode. You can play alone against the integrated AI player, which has some nice tricks to beat you.
✭ Configurable AI player strength. So you can decide how strong the opposite AI player will be.
✭ Play against your friends on a single device.
✭ Challenge your friends over WiFi or Bluetooth using the network multiplayer mode.
✭ Cool football crowd audio background, which gives a realistic football game feeling.
✭ Smooth ball animation. So you don't have static ball graphics like a lot of other flick apps have.
✭ Game statistics at the end of the game.