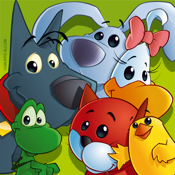 Enjoy the cartoons from the famous award-winning series Pet Pals on your iPhone, iPod Touch and iPad and follow the adventures of Nameless, Holly, Top Hat, Moby, Diva and Pio in their fantastic world.

With an inexpensive subscription available for purchase through the application, Cuccioli.TV offers ad-free unlimited access to the 52 episodes of the first and second seasons as well as to 26 brief episodes of the series H2Ooooh!. The subscription also guarantees unlimited access to additional episodes as they are added to the catalogue.
All the videos are available both in Italian and English and can be accessed through Wi-Fi or 3g networks – for the latter the standard telecom supplier fee will be applied.

The PetPals.TV subscriptions are linked to your Apple iTunes Account. Here is a brief clarification of how they work:

• The subscription grants access to all videos available through the application. You can play all videos not once, not twice ... but as many times as you like.
• On your first access, you will have the option to choose from three subscription durations: 1 week for 0.99US$ or 0.79€, one month for 2.99US$ or 2.39€ or three months 5.99US$ or 4.99€.
• Payment will be charged to your iTunes Account at confirmation of purchase.
• Subscription automatically renews unless auto-renew is turned off at least 24-hours before the end
of the current period.
• Account will be charged for renewal within 24-hours prior to the end of the current period, with the amount of the subscription being renewed
• You can manage your subscriptions and turn off auto-renewal by going to the yours iTunes Account Settings after purchase
• No cancellation of the current subscription is allowed during active subscription period
• For Privacy Policy and Terms of Use refer to http://www.alcuni.it/index.php?aid=455


Pet Pals the cartoon, created by Francesco and Sergio Manfio, who is also the director, is produced by Gruppo Alcuni in co-production with Rai Fiction, DQ Entertainment, Alphanim, Agogo Media. Pet Pals tells of the amusing adventures of a groups of friendly animals: Holly, the brave and straight-talking kitten, Top Hat, the shy rabbit who often trips over his rather long ears, Diva, the vain duckling, Pio the funny frog who always has an amusing joke to tell, the chick Nameless who doesn’t talk and communicates using placards from which appear, as though by magic, a vast array of different objects, and lastly Moby the dog, whose name comes from the fact that as a pup he swallowed a mobile phone.

First season: From Australia to Venice
In the first season, the Pet Pals take part in an exciting and adventure filled cruise which will take them from Auckland to Venice, where they will be reunited with their young owners. Along the way, they meet lots of different animals, native to the areas where our heroes come ashore. From an ethological point of view, thanks to the support of professor Danilo Mainardi, the animals are described in a correct, yet amusing, manner.

Second season: On the trail of Marco Polo
The second season sees the Pet Pals off on a long journey through history on the route travelled by Marco Polo, thanks to a magic frame which allows them to travel through time. The adventures of the six inseparable friends will bring us closer to the legends and locations described by the Venetian merchant in “The Million”, with the addition of a few colourful and imaginative details and always with a good dose of humour and fun.

Third Season: In the Median Forest
Coming soon. Subscribe through the application to guarantee access to as they become available.