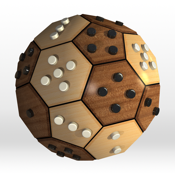 Vorble is a fun and addictive strategy puzzle game where you battle to control a 3D board without edges, a soccer ball shape of 12 pentagons and 20 hexagons.

Two-player games, you against another person:
• Shared Screen – two people play on the same device
• Play Friend – play your friends over the Internet
• Play Public – play against people from all over the world

Collect Stars, win Achievements, and score points to complete in Game Center’s leaderboard against your friends or the world.

Beaten a friend at Vorble and want to boast about it? You can view results and watch replays of every one of your Internet games at http://vorble.com

Vorble also includes an interactive Tutorial, so simple that anyone can learn to play in minutes.