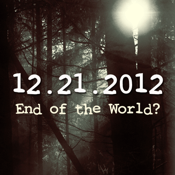 What is the Apocalypse?

What does Nostradamus say? What do the Mayans say?


What is the End of Days?

If you're new to the 2012 discussion, you need to learn a bit more about the End of Days before you begin to make any sort of decisions about what you need to do.

What Does the Bible Have to Say?
The Bible is a book with a lot to say about everything, but what does it have to say about the end of the world?

Though it might seem odd that the Bible would have ideas about a time that was so far into the future, perhaps there is something that you can learn about the end of the world from the most popular book in the world.

It has more to tell us than we realize.

What Does Nostradamus Predict?
Everyone knows that Nostradamus had a lot to say about everything, but this doesn't mean that he knew about the end of the world...right?

Within "The End of Days - Apocalypse 2012," you will learn more about:

What Do the Hopi Know?
Native cultures are often more in tune with the world than the rest of us – and the Hopi are no exception.

Who Are the Mayans?
But it's the Mayans who tend to get the most attention when it comes to 2012.

Books upon books have been written about the end of the world and the Mayan culture.

There's An End of Days Theory Too...
Zecharia Sitchin is another person who seems to think he knows what will happen in 2012.

In "The End of Days - Apocalypse 2012," we will cover:
•Who Zecharia is
•The end of days theories
•The invisible planet, Nibiru – Planet X

While these ideas might sound far-fetched right now, as you learn more about this person and about his ideas, you will find that things are more realistic than they first appear.

And you might just change your whole perspective on 2012 as a result.

Is it the end of the world?
No one is completely certain.

But "The End of Days - Apocalypse 2012" will give you the information you need to make up your own mind.

****Do you want to make an app? Check out TheAppInstructor.com! And learn how to make iPhone and iPads apps today...it's a lot easier than you think!****