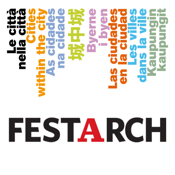 Festarch is back. After the runaway success of the 2007 and 2008 edition in Sardinia, where students, architects and city-folk crowded the halls in Cagliari’s former Tobacco Factory, the architecture show moves to Umbria, and the piazzas and palazzos of Perugia and Assisi, on 2-5 June.
This year’s theme - The Anticity - will explore the burgeoning individualism and social disaggregation which, in Italy and many other countries, is undermining the very assumptions on which living in cities is based, eroding relationships of proximity and exchange between individuals and the communities they belong to, hindering the sharing of communal facilities and amenities, and destroying any possibility of social mobility. The Anticity is a force that shapes space, creating everywhere ghettoes and pockets of identity inhabited by individuals who share the same origins and aspiration. The speakers at Festarch - architects, designers, urban planners, writers, artists, anthropologists, politicians, philosophers - will debate the positive and negative effects of power exercised through space and strategies for the reconstruction of a civil architecture and a society that is both open and aware of the importance of “shared” places par excellence, namely cities.