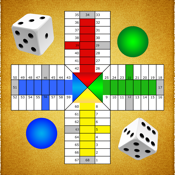 Parcheesi game with 2 dice per player

GamePlay :
The game can be played by 1 to 4 players. Each player race their four pawns from start to finish according to dice rolls along a path. The game gets interesting when one player's pawn lands on a square/grid containing an opponent player's pawn, then the opponent player's pawn is captured and returns to the starting area. The winner is the first player to get all four of his/her pawns to the finish square/grid (home square/grid). Play and try this amazing classic game of Parcheesi.

About Parcheesi :
Parcheesi is also known as Ludo, Ludi in the Caribbean, "Fia med Knuff" in Sweden, "The Chinese" in Poland, 'mens-erger-je-niet" in the Netherlands. Parcheesi board game is also similar to Tock and Sorry!

Play and try this amazing classic game of Parcheesi.