TITUS - politics is not a game 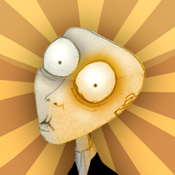 Have you ever wondered what it would be like to be a politician?

Play the role of TITUS, an agoraphobic watchmaker who decides to achieve his dream of becoming the president of Wealland.

TITUS by Frogames is a dark and cynical political campaign simulator, full of low blows, corruption and 3D mini-games for the iPhone, iPad, and iPod Touch.

• 5 mini 3D arcade games.
• a Campaign mode where you will have to conquer your fears and face Desmond the mime to become President of Wealland.
• a Simple Election mode.
• a Direct access to the mini-games to practice and beat your own records.
• more than 30 ACHIEVEMENTS.
• an encyclopedia that provides game tips, descriptions of the characters you already met, and a map of Wealland.
• a somber universe featuring a uniquely gloomy atmosphere, with troubled characters, and eerie music.

♥ "In a market that often rewards copycats and me-tooism, it's refreshing to play such an odd little game and find that it's also a lot of fun. Darkly cynical fun, but fun nonetheless. (...) It's definitely a happy surprise." - toucharcade.com 4/5

♥ "This looks set to be a very successful game" - heappwhisperer.com

♥ "It all feels a little like something Tim Burton could have conjured up. Even the music feels suitably eerie." - 148apps.com

♥ "The actual gameplay is more about how well you do at minigames than actual strategy, but it's a fun affair, providing a tweaked parody of politics and that really interesting art style" - tuaw.com