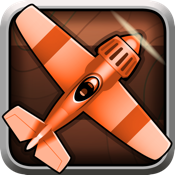 In the Steambirds universe, the Allies are losing the war against the Axis powers and their incredible Armada. As an elite Allied pilot, your goal is to stand your ground against endless waves of Axis aircraft. The odds are overwhelming. You're hopelessly outnumbered. The United Kingdom is almost certainly doomed, but you *might* be able to save its citizens.... if you can hold off death long enough for them to evacuate!

Steambirds: Survival features 10 unique aircraft and 80 unique missions. Each plane in SB:S has its own strengths and weakness which will require you to change your strategy if you want to succeed. You'll also need to collect powerups dropped by enemy aircraft; grabbing and using these at the right time will be the key to your survival.

Steambirds: Survival, the sequel to the hit game Steambirds (first released in 2010 and played by over 12 million people worldwide) is brought to you by its original creator, Spry Fox, and by Halfbrick, the developer of Fruit Ninja and Jetpack Joyride.