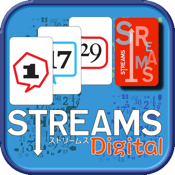 The original analogue card game “STREAMS” (produced by SUGOROKUYA) has been extremely popular since the launch in May 2011.
The concept of it has been digitalized as it is!
“STREAMSdigital” was created in a way anyone can enjoy easily with smart phones.
The amusingness of analogue games is to play excitedly together with friends.
“STREAMSdigital” has inherited the spirit and has realized that multiple players can play at a time.
It attracts both children and adults and they can compete enthusiastically to put numbers in certain orders.
It’s too hard to stop once you started.
“STREAMS” is not the type of game that you rely on luck just like “BINGO” ,but the game to draw luck yourself with
“anticipation” and “intuition”.
You don’t need to think hard nor quick. Just believe in your intuition “This card will come!” and place 20 numbered cards
which come out randomly out of 40 cards in 20 squares.(Square=Mass)
That’s all you have to do but the simplicity makes you addicted to the game.
When multiple players are joining, they may shout “OK, come here!” or “Oh my gosh!!” and enjoy the game together.

The goal is to place cards on 20 squares (colored in light blue) lined like a river stream in the order that the number gradually
becomes bigger from the upper stream (upper left) to the lower stream (lower right).
First, tap the card faced down and check the number written on it, and then choose the square on which you want to place the card and tap it.
The numbers written on the 40 cards are integer from 1 to 30 and there are two cards of 11 to 19.
There is, also, a “Star of a hope card(★)”. It is a versatile card that can play as any number from 1 to 30.
Anticipate which numbers will come follow now and place cards on squares so that the numbers will be continual (gradually become bigger).
When the same numbers are placed next to each other, it is considered as “continual” but when the number on the immediate right is smaller
by one or more, the number of the continual square is to be “cut off” there.
By the time you tap the next card, the back ground color of the most recently placed card is yellow.
It indicates that you can still replace the card on another square.
You can move the card as you slide the card with your fingertip.

A game will be over when you finish placing 20 cards on squares by replacing them or just putting the cards.

You win the perfect score of 300 when the numbers are continual on the stream.
“STREAMS” is a game to aim for that, but it cannot be achieved so easily. When the perfect game cannot be made,
you win the points based on the score sheet.(the sheet "add points")
You can win certain points according to the number of continual cards and the total points will be the score of the game.
Basically the higher score can be obtained as you get more squares of continual numbers,
but the scores for 6,12 and 17squares are “gimmicky” and low. Players should be cautious about it.
When the “Star of a hope card(★)” is used, the numbers of the continual square is adjusted so that the player always gets the high score.