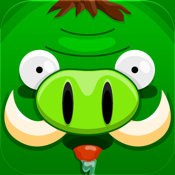 Before the birds got angry, the pigs were hungry!!.

Now it’s time to open the doors to a new adventure. A lot has been said about birds and chicks, but we are going to show you a new clan of special pigs ready to fight for their right to eat!! And they’re gonna!!.

The Hungry pigs are not your usual tiny, silly kind, they all have special skills, acquired in order to break all kinds of obstacles, defeat those annoying birds and feed their immense hunger.

Though they are special, their life might be on the line if they don’t get those tasty eggs…. You need to beware of the birds around because they want to dry up our pigs’ inspiration and cut short their mealtime; some will threaten the pigs by flapping their wings, others are more zombie-like and won’t start their flight until they see you.

Get it now and start taking control over this amazing journey that goes beyond the limits of time, from prehistoric scenes to civilization. These pigs are going wild, and they must get all the eggs.

Play through many levels within 3 big world episodes:
**1 Million Eggs B.C: prehistoric battle for survival, in the forest between plants and creatures in the background. They’ll fight for breakfast.
**Battle of the Middle Egg: Medieval journey, playing around castles and mountains, now they need lunch.
**Eggs & The City: among cars and people, all the traffic and the rush, and obviously, nasty birds, we finally get to dinner.

Tilt the phone and roll the pigs, tap them to fly, fire at flash speed, launch them to the stars or make them explode! You’ll get familiar with their special skills as soon as you start playing.

The diversity of levels will take you to the most addictive and fun type of gameplay.
Some levels will take you back to those amazing platform scenes, arcade-like where the pigs will jump and bounce and break all kind of things.
Other levels will become puzzle challenges where you’ll have to play with the dynamics of physics and gravity, using the special powers these pigs have acquired.
"Oh my God! This pigs vs. birds thing is hilarious! Every time I get a break I start playing. It’s so frustrating when you lose and so addictive when you win" – player review.

- A MUST HAVE!!, it’s the ultimate pocket game. Everybody is playing it.

… And remember, when playing "The Hungry Pigs", don’t eat bacon for breakfast, only eggs!