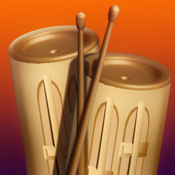 The Celempung is made of bamboo with the strings cut out from the bamboo body itself. These kind of idiochord tube zithers have a wide distribution throughout insular Southeast Asia under various names. Presently in Central Java, the name Celempung is used to indicate a multi-string box zither which resembles the Kacapi of Sunda.

The instrument is held at an angle rested against the player’s lap. The strings are struck individually with the mallet which is held in the right hand. Although both strings vibrate when either one is hit, the pitch of the string which is truck predominates. Variations in dynamics and timbre can also be made by striking different places on the strings. The left hand, meanwhile, covers and uncovers the side soundhole to effect further changes in sound color. In covering the soundhole, the left hand will slap the body of the instrument creating another percussive effect. Considering these techniques and their effect, the function of the Celempung can be said to be that of a percussion instrument rather than a string instrument. When the strings are sounded, the emphasis is on changes in dynamics and timbre rather than pitch changes.

An ensemble which uses various sizes of Celempung along with the rebab, karinding, toléat or female voice is known as Celempungan which was popular that the Gong, Kempul (small gong), Kenong (kettle gong) and Kendang (drums) fulfill as members of the gamelan orchestra. This itinerant gamelan Celempungan has, in resent times, gradually been pushed back into the shadows, with only the pieces from its repertoire remaining to be taken over and performed with a different ensemble. Today, these pieces are performed by the gamelan with the Gong, Kempul and Kendang replacing the Celempung to meet the present-day requirements of dynamic sound.