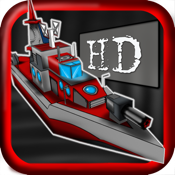 Ships N' Battles, a cross platform battleship game: play against iOS and Mac around the world!

- Digitally Downloaded: "There's been a few attempts at making battleship games for the platform, as you'd expect. None are as good as Ships N’ Battles" (4/5)

- App-Score: "Ships N' Battles is a battleships game for iOS and Mac with impressive 3D graphics and updated gameplay" (9/10)

Play the next generation of the classic game, controlling the most destructive power of the seas with a finger touch.

Play against your friends from anywhere with Multiplayer via Game Center or if you are feeling a little "forever alone", there is always the option of a random match.

Compare your rating in the World Ranking leaderboard and show who is the king of the seas.

And all of this packed in a universal version, ready to run both the iPhone / iPod and your iPad.