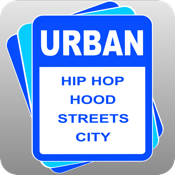 This is a group game with play similar to Taboo, but with words dedicated to Hip Hop culture such as Bling, Collard Greens and Snitches.

To play, groups should be divided into two teams. Team A selects a clue giver from their team who will attempt to get his or her team members to guess the main word at the top of each card without using any of the forbidden words below. Imagine trying to get your team to guess the word "Afro," but you must describe it without using the words Pick, Hair Style, 1980s, Puffs or Round.

Once the main word is guessed, another card appears and the team tries to collect as many cards as they can in the allotted time. If the clue giver says one of the forbidden words, the team will not be credited for that word.

After time expires, a player from Team B becomes the clue giver for their team. Teams alternate play until either team gets to a predetermined score, or until everyone has had a chance to be the clue giver.

You can play with the Hip Hop cards, a standard set of cards, or a combination of both, depending on the crowd you are playing with (see screenshots). There are over 1,200 cards to play, and the cards will not repeat until ALL the cards have been played. You will enjoy playing all of these great words with friends.

- A point is lost for skipping cards or getting buzzed.
- Score can be corrected at the end of each turn, in case an incorrect button is pressed during game play.
- Free lifetime upgrades as new words are added.

Taboo ™ is a registered trademark of Hasbro Inc. This product is in no way affiliated or endorsed by Hasbro and should not be confused with their product, Taboo, Taboo for Kids, Celebrity Taboo, electronic Taboo, Taboo Junior, Taboo for Kids, The Big Taboo, Taboo Body Language, Taboo Quick Draw, or any other similar product catch phrase, word party.