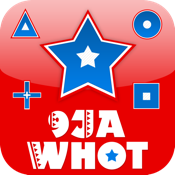 HAVE YOU EVER PLAYED 9JA WHOT?

If you have, then you know this is the BEST card game on the planet!

The primary purpose of 9JA WHOT is to be the first player to rid of all your cards. Playable cards are cards with the same symbol or number as the previous card played. Game ends and scoring begins when a player successfully gets rid of all their cards. Use General Market, Pick Two, and Hold On to perplex your opponents.

* Chat with players while playing

* Continue to chat and watch game after elimination

* All via game center

* Last card and second to last card are displayed automatically

* In multiplayer games, player with the highest combined point total left in their hand is eliminated

* Star cards are doubled when scoring