My Birds of Prey HD Lite 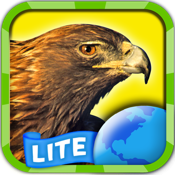 From the creators of the award-winning app, My Bird World, here's their second learning game: My Birds of Prey! Co-produced with Cornell Lab of Ornithology, this stunning collection of four different games has multiple levels of difficulty to challenge people of all ages. Play two games to win birds of prey and place them in different habitats. Then play two more games to win food for your birds! Each time you feed a bird, you’ll discover a new fact about it and hear its call.

In this LITE version, you can play all four delightful games and win up to 4 Birds of Prey. If you like it, you can upgrade to the full version and play with all 15 birds and learn over 400 raptor facts.

“With these intriguing and fun challenges, learn about North American birds, including their songs, food choices, and habitats. The game is filled with fascinating facts, real bird calls, and great photos!”
– Nancy Trautman, Director of Education, The Cornell Lab of Ornithology

“..was a unanimous vote of awesomeness by a group of students...all agreed that this app is the best they had played ever!”
– teacherwithapps.com

“ ..lush interactive bird learning app... the photographs are gorgeous and the bird songs are real...intuitive and you’ll learn fast.”
– bestkidsapps.com

“It’s great for children, but plenty of adults are getting hooked on it too.”
– The Miami Herald

“These are happy birds - and they want to help you learn!”
– Seattle Times

• Memory – Play this favorite game in different ways: Find matching pairs of bird images or match birds with their calls, at varying levels of difficulty.

• Flight Patterns – Watch closely to track flying birds and find the raptor that has the prey. Levels of difficulty range from lazy soaring to speedy flight.

• Infestation Predation – Act fast to find the right bird to keep an Infestation of mice, lizards, snakes and other prey at bay!

Keep playing until you’ve won all the birds of prey in the game.

• Place your raptors in five beautiful habitats – field, cliff, river, woods, and marsh – and move them from one habitat to another to see where each bird likes to nest and hunt.

• Stunning bird calls are from The Cornell Lab of Ornithology’s world-famous Macaulay Library, the largest collection of natural sounds.

This amazing, fully interactive app was co-produced by The Cornell Lab of Ornithology and the bird-loving educational team at Five Ravens, the digital division of Birdcage Press.