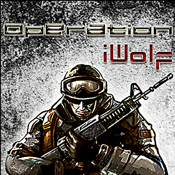 with the world at war, you're our last hope. settle into your favorite sniping spot and get ready for a fast-paced sniper battle.
don't forget the sniper code: one shot, one kill. can you take the heat?

the year is 2011, and the world has fallen into turmoil. HEAVEN, an underground united terrorist group funded by unknown financial resources has launched a series of attacks all over the world. their purpose is to control the world order through international terrorism.

GATO, global anti-terrorism organization, is jointly formed by nations and PMCs, dedicated to quickly responding to cross-nation terrorist threats and to eliminating the HEAVEN threat.

you, 'cobra', are a former US marine, and a new member of GATO. you are now being assigned to a covert operation code named 'iwolf'.