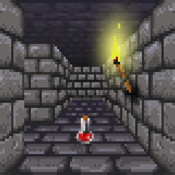 In QuestLord you assume the role of a lone hero out to save the Shattered Realm from certain destruction!