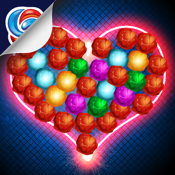 Zzed is the perfect cross between a space shooter and three-in-a-row marble popper that you have ever seen! The main character is a young humanoid named Zzed. He had to graduate a course in cosmic waste management and now he is trying to get a job at the Zopa-Zola Corporation. Why? The answer is very simple. He is in love and ready to do anything to marry the girl of his dreams, a pretty woman named Zzuma. And of course a good job with a good paycheck will go a long way in impressing her. So go ahead to start your adventure!

The player has to clear away space meteorites by collecting them in groups of three or more, after this they will self-destruct. Game play requires good reactions, quick thinking, and self-control in extreme situations.

Mysteryville: Sort out the small town's mysterious events in this classic hidden object game - made just the way it should be!

Million Dollar Quest: Solve the mystery from main hero’s childhood, travel the world and win one million dollars in the unique mixture of hidden object, puzzle and adventure genres!

Pioneer lands: an addictive combination of business simulation and strategy set on the frontier of America's Old West! A true Western casual game!